EU elections 2019 results: the good, the bad and the ugly

By Stephanie King
Voices for Europe Board Member

It’s Monday 27th of May 2019 and we have woken up to media commentators talking of a Brexit party ‘triumph’, to Boris Johnson portraying the result as a ‘final warning’ to his party, and to more Brexiters being called to comment on TV than Remainers.

Even the revered Sir John Curtice, who is considered to be the god of pollsters and trusted to provide the best of analyses, concludes cautiously that the result does not provide a clear verdict.

After all that, you’d think these elections mean victory for hard Brexit, with Curtice trying to soften the blow.

Let’s take a step back and use our own minds to analyse the results, provided courtesy of Europe elects, who shared this graph on Twitter early this morning: 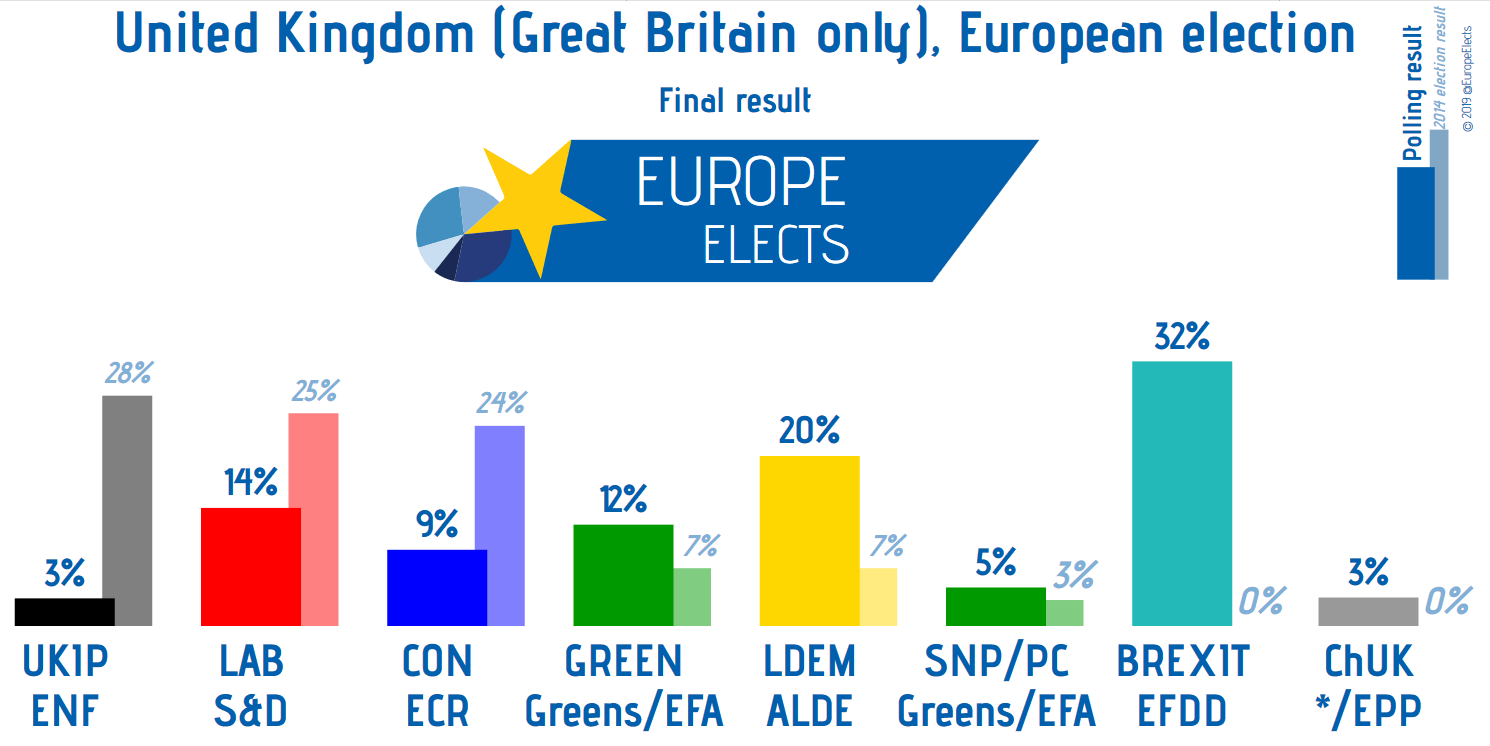 You wouldn’t believe it listening to the BBC, but Remain parties came top at the Euro elections in the UK with 40.4%, then Brexit supporting parties on 34.9% and Con/Lab on 23.2%.

Around 9 million people voted for the Remain parties and 7 million for the two hard Brexit parties. Many commentators suggested that this EU election was a proxy second referendum. Well, it is clear who won that.

Those Labour MEPs who get to keep their seat are all strong Remainers: people like Claude Moraes and Seb Dance for London, Julie Ward for the North West of England, Richard Corbett for Yorkshire and the Humber.

Outgoing Lord Mayor of Sheffield Magid Magid, who campaigned in a T-shirt proclaiming that ‘immigrants make Britain great’, is the first Green MEP for Yorkshire and the Humber.

This election has seen the highest number of Green MEPs ever elected.

The LibDems have performed extremely well and are now seen as the party for Remain.

The SNP has had its highest-ever EU parliament vote, thanks to Nicola Sturgeon’s Remain message.

The individual known as Tommy Robinson was not elected and his failure was met with mocking laughter.

UKIP have lost all their MEPs.

So, let’s not despair. Curtice is too cautious in his conclusions. If we put the numbers together, we have a clear remain win.

Remain parties failed to form an alliance ahead of the elections and also failed to campaign effectively. These shortcomings could bring doom to the Remain cause if not addressed quickly. Given this context, we should be in awe of those Remain voters who thought of voting tactically for the LibDems, who are represented in the media as second winners after the Brexit party.

The results must motivate Remain parties to work more collaboratively, let’s hope they wake up to the urgent need of putting an end to tribalism.

The results should also make Labour come off the fence and clearly declare for a People’s Vote, with option to Remain.

Alas, and in spite of mounting pressure from his party, Jeremy Corbyn refuses to explicitly back another referendum.

Many in the media persist in misrepresenting any poll or election result as a cry out from sidelined Brexit voters who want their leaders to ‘get on with it’. These EU elections results have sadly not altered our distorted public discourse.

Expect more Brexit politicians to join Boris Johnson and abuse the figures citing the result as a proof of the need to ‘honour’ the referendum.

Nearly 35% of those who voted thought it logical to elect obvious members of the ‘elite’ on a ticket supposed to oppose said ‘elite’. This is very concerning.

As the Brexit party was campaigning, some of its supporters called for the lynching of Jeremy Corbyn. This comes two years after their leader, Nigel Farage, threatened to ‘ don khaki, pick up a rifle and head for the front lines’ if a hard Brexit didn’t happen.
Those Brexit party voters must also know that Farage is considering court action against the man who threw a milkshake at him because milkshaking is ‘an act of violence’. They don’t see the lack of logic in this either.

There are 7 million of voters out there who simply do not listen to reason and fall for the biggest lies peddled by the most obvious charlatans heading a makeshift party without a manifesto.

And they have ‘cousins’ on the continent, as Widdecombe and Rees-Mogg and other Brexit party MEPs could soon find friends in those elected by the far right in France and Italy. Salvini and Le Pen have already started to look for an alliance with Farage’s MEPs.

The disaffection with what the media call the ‘status quo’ leaves a void which, if we are not careful, could be filled by the far right.

Conclusion – what does this EP election result mean for Brexit and what to do next:

As Remainers, we should rejoice at being part of over 40% of voters who clearly stated that the country does not want to leave the EU. If EU citizens living in the UK had not faced difficulties casting their vote and if Brits living in the EU27 had not encountered similar issues, the percentage of pro remain votes would be even higher.

The tide has turned. Let’s not fall for mainstream media prattle. This EU election result will make Parliament and any brexity PM think again about the mandate for Brexit. Even if they publicly state otherwise.

The coming weeks will be crucial as now both main parties will necessarily harden their position in light of having haemorrhaged so many votes.

In order to enforce Brexit, a hard-right Tory PM would either have to prorogue Parliament (an openly dictatorial and therefore unlikely option) or trigger a general election, standing on a No Deal manifesto.

Winning this election would not be easy. It would entail making an alliance with the Brexit party. Farage might not be too keen on the idea of propping up the establishment he claims to fight.

In a general election, the Remain vote would be split.

Labour has started to move towards a People’s Vote. But not clearly enough yet. Labour insiders, please keep the pressure on.

The Remain parties are still not collaborating but today’s results could bring a change.

We must encourage our leaders to forget about tribalism and collaborate. Talk to ‘soft leavers’, those voters whose minds can be changed, the Remainer Now movement can tell us how.

Above all, let’s continue our grassroots actions. Let’s create stronger ties between our groups. We must keep going on demonstrating to the EU that those Remain MEPs we just elected are the real representatives of the country .